"Hairspray" tears up the stage at Saginaw's Pit and Balcony

By Janet I. Martineau

That word sums up the Pit and Balcony Community Theatre production of the musical "Hairspray," opening tonight (Oct. 2).

That word and a whole lot many more words which will follow in this review. We had to go home after its last dress rehearsal and take a nap... there was so much energy exuded.

Recently we extolled the choreography in the Midland Center for the Arts production of "Mary Poppins." Well, "Hairspray" may have gone one better because the cast just never ever stops moving in this show directed by Tommy Wedge with choreography by Wedge and Candy Kotze. 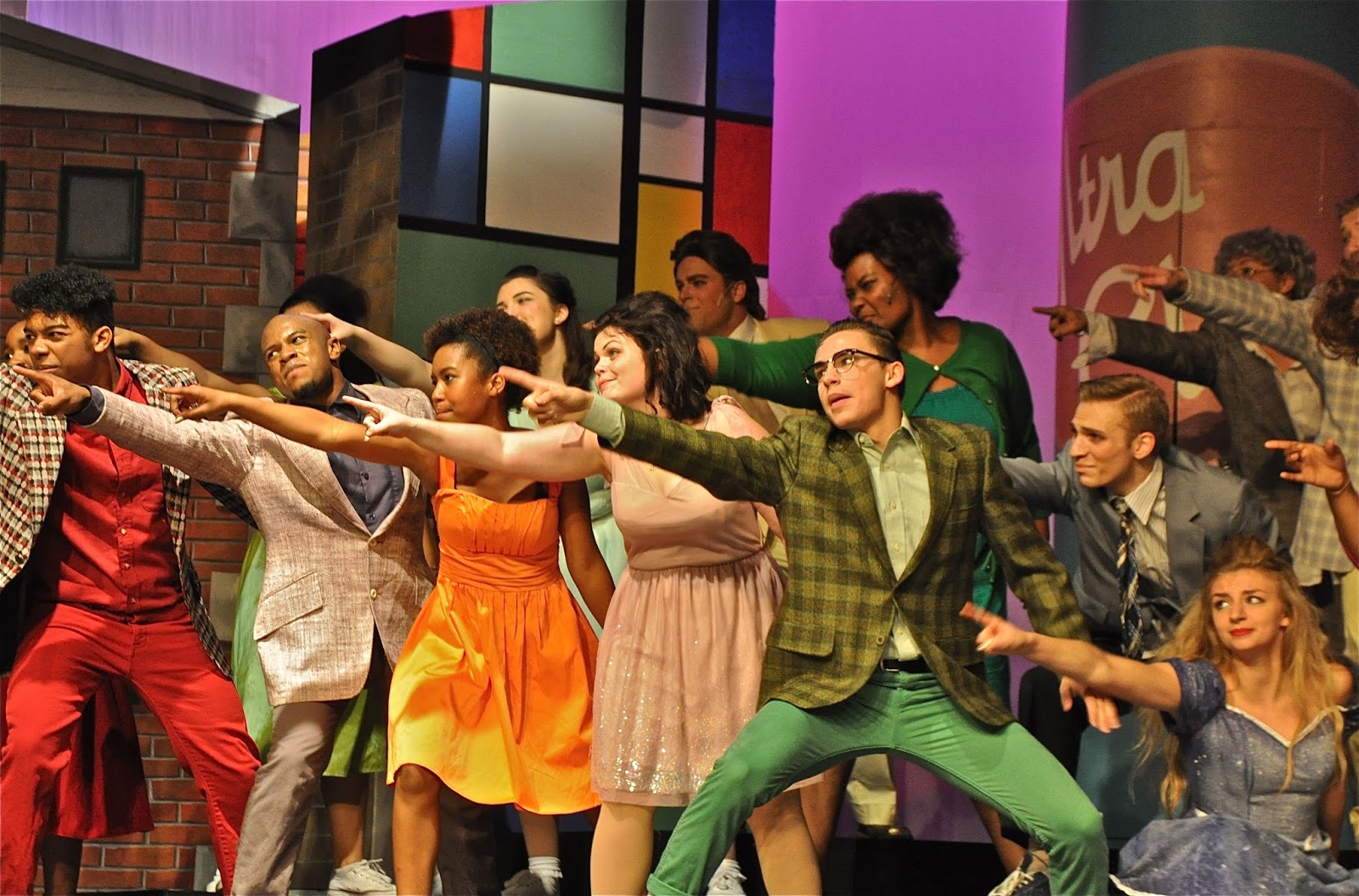 In fact the whole show never ever stops moving – it just flows seamlessly with set movement part of the action all through the first act and then all through the second act. Not a pause at all.

For those unfamiliar, "Hairspray" is based on the movie by the same name, which tells the fictional story of an chubby white girl breaking down the color barriers on a hit rock and roll television dance show, set in 1962 Baltimore. Her mama Edna Turnblad is traditionally played by a male. The lyrics are hilarious, often spoofing the whole era, risque here and there.

Along with that splendid choreography, Wedge has assembled and directed a cast delivering endless vocal, acting and/or dance highlights. Their facial expressions are as fluid as their dancing.

Among the highlights are Jenny Cohen as that tubby teenager, Chad William Baker as her big mama (played so spot on), Paul Lutenske as her papa, Janelle Bublitz as her nerdy best friend, and Brennon Meinhold as her eventual kinda-daft boyfriend.

Across the racial divide check out the overall performances of Donte Ashton Green as Seaweed Stubbs and particularly Adia Jackson as the really expressive Little Inez; the vocal powerhouse of Shirlene Brown as Motormouth Maybelle, and the all-out dancing by Ryan King.

Watch Carly Peil throw an excellent triple curve, two of them as men.

And overall just watch that entire ensemble who are as one.

With 19 numbers on the playlist, two are standouts: “Momma, I’m a Big Girl Now” for its intricate movements and razor-sharp lighting demands. And “Timeless to Me” for its sweet and tender dance between overweight mama (Baker) and skinny dad (Lutenske).

Bravo also to the orchestra, directed by Sara Taylor. What a sound. . And the lighting, colorful costuming, props, scenic design and attention to detail are all incredible.

And it has a little Saginaw back history. Back in 2003 it won eight Broadway Tony Awards, one of them best musical and another for best director, to Saginaw native and Arthur Hill graduate Jack O’Brien.